There is no freakin' way this site is going to be usable anytime soon. I'm just going to be using as a wiki for things I want to share with others that aren't relevant to my other sites. Most of this site's content is currently locked from public access. » Personal Musings » Tech Commentary » Microsoft » The history of the Start Menu
musings:tech:microsoft:startmenu

The history of the Start Menu

This article was originally published on December 18, 2013.

It’s been a long time – almost twenty years, in fact – since the Start button was introduced by Microsoft. A key feature of the all-new Windows 95, the Start button provided one-click access to all your programs in a simple, easy-to-use menu format. It was pretty straightforward. Clicking Start gave you options for programs, documents, settings, and even a file search tool. 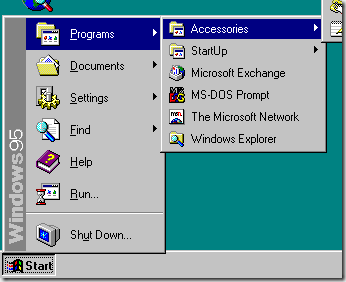 The Start menu was great and all, but like everything in technology, there was plenty of room for improvement. Windows 98 included some new enhancements to the still-young Start menu. You could add custom shortcuts and folders above the standard Start menu entries, and you could now right-click on menu items to move, rename, copy, or delete them.

These were very welcome improvements, but there was one pretty serious problem – normal users had no idea how to customize it, so it frequently would get cluttered with hundreds of entries automatically created by installed applications. Enter the next big consumer release of Windows – XP. (We’re just going to pretend like Windows ME never happened.)

Windows XP brought an all-new, candy-colored “Luna” interface, and with it came a new Start menu, designed to be easier to customize, easier to use, and easier to keep organized.

This change was not welcomed by many. It was too much of a change all at once, and the majority of power users – including yours truly – didn’t even bother trying to adjust to it. Instead, we just turned on the “Classic Start Menu” option so we could keep living in blissful ignorance of what the redesigned Start menu actually offered. It turns out that this new design was actually pretty dang useful. Software could still auto-create start menu entries, which would appear under “All Programs”. Meanwhile, the applications you actually cared about could be pinned to the main Start menu view, and frequently-used applications would automatically show up under those pinned favorites. The right side of the menu gave quick access to the user’s frequently-used media folders. Looking back on this major redesign, the original Start menu looks pretty archaic, doesn’t it?

Nobody’s going to deny that Windows XP was a raging success. The end of the 9x kernel introduced consumers to a significantly more stable operating system with native support for modern USB peripherals. Finally, we could plug in a thumb drive without having a floppy disk of drivers handy!

Pushing forward as they do, Microsoft released Windows Vista a few years after XP’s blockbuster launch. Vista was a miserable failure, and sadly, a lot of people gave up on it before it was given a fighting chance. If only they’d waited until Service Pack 1… Anyhow. Vista’s Start menu was yet another noticeable change from its predecessor. The All Programs menu was condensed into a multi-level tree view, rather than multiple columns of menus and submenus. The main Start menu itself was still split into two columns – frequently-used applications and frequently-accessed folders. 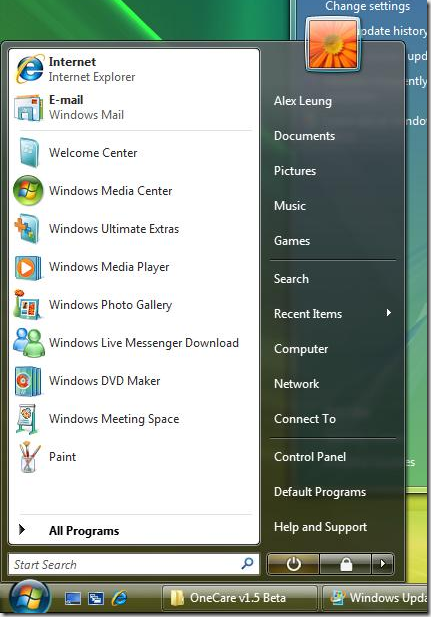 More importantly, a system-wide search was introduced as an integral function of the Start button. With one tap of the Windows key on your computer’s keyboard, you could start typing the name of an application or file, and the Start menu would populate with the results of your search. It wasn’t super fast yet – improvements to Windows’ native indexing engine would come with later versions of Windows – but it made light work of finding what you were looking for. Unfortunately, the widespread distaste for Vista prevented people from finding out how useful these improvements really were.

The Windows 7 Start menu barely changed from Vista, but because so few people were willing to try Vista, it seemed like a major improvement over most users’ previous OS of choice, Windows XP. The indexing engine in Windows saw some improvements, so using the built-in search box was a little faster than the performance seen in Vista. 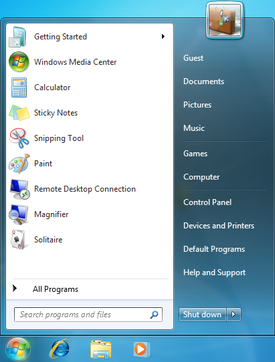 Once you start using the Start menu’s one-click-wonder search feature, you’ll find it’s difficult to go back to an OS without it. On the other hand, a lot of users never really figured out what the search feature was capable of doing, which made the move to Windows 8’s modern Start screen much more difficult than it needed to be. I will readily admit that it took me several years of using Vista and 7 daily before I realized how incredibly useful the search box actually is.

I’m pretty sure you’re wondering at this point what the hell I’m rambling on about.

The Start menu has, since its inception, maintained a simple goal: provide easy access to installed applications and user data. When the Windows 95 Start menu was introduced, people were so used to the kludgy Program Manager from Windows 3.1 that a lot of users refused to even try the new Start menu. When XP added the ability to pin your favorite programs to the Start menu, users missed out on this key feature because of a stubborn desire to stick with what was familiar. Vista and 7’s search functionality was ignored because it was too different.

Windows 8’s Start screen isn’t all that different, when it comes down to it. It still gives you one-click access to your most-used software. It still has an integrated search feature that looks at application names, file names, file contents, and even the Internet to find what you’re looking for. It even gives you access to the old way of doing things, with its All Apps view that replicates the applications menu first seen in Windows 95. It has all the functionality of every previous iteration of the Start menu, plus all kinds of really cool new stuff, like full-screen apps and live tiles. Instead of having to install extra apps that run in your system tray or your sidebar, Windows 8 comes with built-in applications that can instantly display realtime information like weather, sports scores, stock updates, breaking news, and more.

Before you start installing third-party applications that attempt to bring back the old Start menu, do yourself a favor and give the new Start screen a fighting chance. With the 8.1 update, you can boot directly to the desktop, and you can relegate the Start screen to use with live tiles and file search and nothing more. The numerous under-the-hood changes that make Windows 8 faster, more efficient, smaller, and overall better are worth adjusting to the changes that come with the Start screen.