There is no freakin' way this site is going to be usable anytime soon. I'm just going to be using as a wiki for things I want to share with others that aren't relevant to my other sites. Most of this site's content is currently locked from public access. » The Tech Wiki » Operating Systems » Microsoft » Windows Server » Windows Server 2008 R2 » Server 2008: Enabling network discovery for a home network
wiki:os:microsoft:winserver:2008r2:discovery

This article was originally published on July 4, 2010.

I run a Windows Server 2008 R2 box at home, primarily for hosting small multiplayer online games and various websites. While Server 2008 is built on the same foundation as Windows 7, there are quite a few differences.

I finally upgraded my main desktop to Windows 7 Ultimate tonight and discovered that my server was no longer showing up under the “Network” view in Windows Explorer. It turns out that in Windows 7, that view (which used to be called Network Neighborhood in the Windows NT/98 days and My Network Places in Windows XP) depends on a service called Network Discovery to find machines attached to your network. For the multiple machines on my LAN running Windows 7, they display in my Homegroup and Network views perfectly fine. Server 2008, however, has Network Discovery disabled by default, likely as a security precaution.

Of course, when I remoted into my server and tried to enable Network Discovery, imagine my surprise when it kept re-disabling itself! A little googling revealed in this forum post that Network Discovery relies on several Windows Services to function properly. Getting everything set up is surprisingly easy.

The following services should be set to Automatic (some may be set to Manual; others may be entirely Disabled):

Once you’ve set up these services to start automatically (and made sure they’re started!), you can enable Network Discovery in the Network and Sharing Center’s advanced sharing settings view. Once you save your changes, your Server 2008 machine should show up in the Network view of your Windows 7 computers. 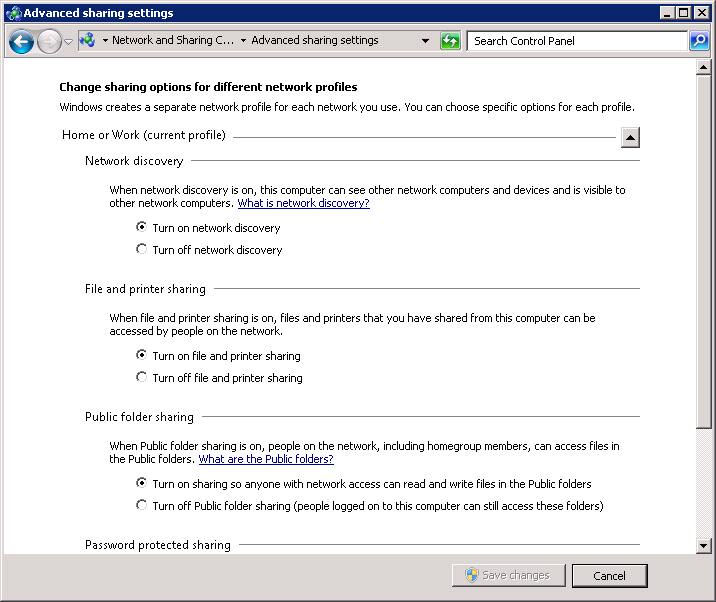